The 2020 DMZ Peace Festival was held successfully in both on- and off-line formats on October 7, 2020 in Seoul, Korea.

The 2020 DMZ (demilitarized zone) Peace Festival, the second of its kind, was jointly promoted by GCS International, a Seoul-based UN-affiliated NGO, and the Kukmin Ilbo daily newspaper.

The event, which took place at the Convention Hall of the Kukmin Ilbo with the attendance of less than 50 because of the DOVID-19 pandemic, was organized by the DMZ Peace Festival Organizing Committee.

Among supporters for the peace festival were the Korea Ministry of Culture, Sports and Tourism, World Taekwondo, the Gyeong Gi-Do Taekwondo Association, the Oughtopian Peace Foundation, the GCS Korea Chapter, and the Korean Fair Play Committee.

Those who attended the event online were representatives from about 40 GCS national chapters, of which a dozen delivered their peace messages in real time via the Zoom system.

The festival started with the opening remarks by Kukmin Ilbo President Byun and GCS International President Choue, followed by an awarding ceremony for the winners of world peace art contest jointly organized by Cooperation Act, a video showing of a joint taekwondo demonstration by World Taekwondo and the International Taekwondo Federation, and a 30-minute online peace-message presentation session. 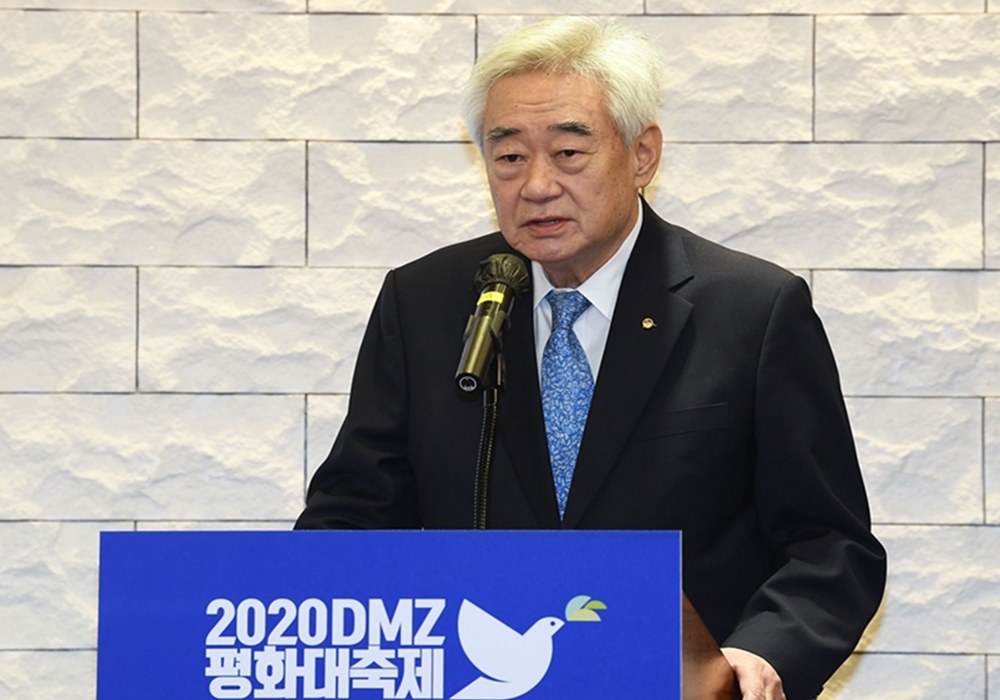 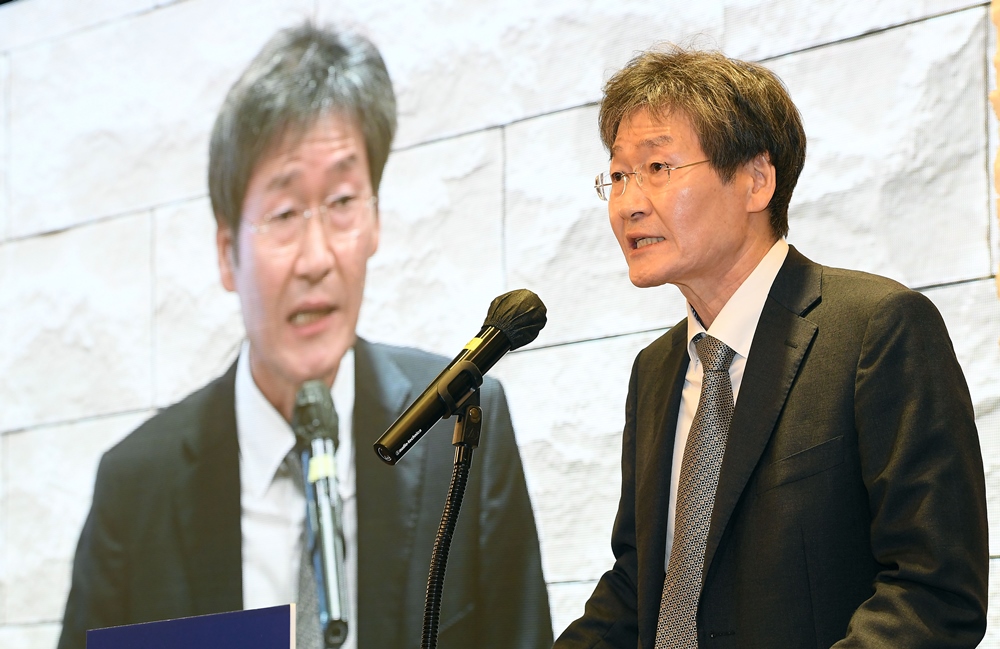 “The DMZ Peace Festival aims to help enhance the awareness of world peace, thus helping create an amicable atmosphere for a unified Korea. In this regard, the 2020 DMZ Peace Festival has a special meaning in that this year marks the 70th anniversary of the outbreak of the Korean War,” said GCS International President Dr. Choue.

He continued to say, “In times of the prolonged COVID-19 pandemic, we should cooperate for the promotion of world peace as a global common society transcending differences in race, religion, ideology and nationality.” “I wish through this DMZ Peace Festival, peace messages should be further get across to the whole world beyond the Korean Peninsula.”

Kukmin Ilbo President Byun said in his opening remarks, “I wish to thank all the online peace-message presenters of GCS national chapters. The power of sport is great. Through the Korean national sport of taekwondo, the Kukmin Ilbo wants to keep sending the message of peace and hope to the world, together with GCS International.”

“I congratulate the DMZ Peace Festival Organizing Committee for your enormous contributions in making this a significant day to deliver the message that ‘Peace is More Precious than Triumph’ through worldwide broadcast of the 2020 DMZ Peace Festival,” said Dr. Selma Li, president of the GCS Portland, USA Chapter, in her real-time online peace message. Master Rick Shin also made a short peace message for the attendants.

Ms. Edina Lents, president of the GCS Denmark Chapter, said, “Those who have been victimized by war, by human abuse or any other kind on inhumanities, they desperately need our support and encouragement to believe that peace can be achieved one day.”

Ms. Lisa Lents of Denmark said, “We believe that peace is a state of mind that can be reached through action. That is why we think it is important for us to take actions toward promoting global peace despite cultural, religious, social and political differences. Let’s promote peace, goodwill and friendship through taekwondo. Let us together work for this cause, because when we are united, we are stronger.”

Mr. Eddy Suprapto of Indonesia, senior vice president of the Asia Journalists Association, said in his peace message that “Peace initiatives should be promoted through the people-to-people forum model. The cultural approach should be strengthened with music concerts, joint film making. Another idea is to boost common games by playing Korean reunification matches in South Korea and North Korea. Sports diplomacy should be encouraged. The new drive for reunification must make the two countries move away from conservative and old approaches and encourage positive soft diplomacy by emphasizing humanity and the benefits of united Koreans. I believe the dawn of a united Korea can be promoted fueled by peaceful journalism.”

Mr. Namdev Shirgaonker, president of the GCS India Chapter, said, “Sport is known to be the most unifying tool for peace in the world. It creates hope, heals wounds, mends fences, and helps rise above our differences. It is now more important than ever considering all that is going on around the world to be a part of something that helps us become valuable citizens of humanity.”

Mr. Raul Pinzon Salamanca, president of the GCS Colombia Chapter said in his peace message that “My country was in a guerrilla war for almost 60 years, leaving more than 300,000 dead. 5 million displaced, thousands of kidnapped and terrorist acts. Despite all the violence, in 2016, the National Government and the guerrillas signed a peace treaty. It has not been an easy process, but the final objective has been achieved: the weapons were silenced.” “If Colombia could reach peace, with such a long and painful conflict, I am sure that our brother Korea, despite all the difficulties, will find the opportunity to embrace peace. Faith and hope Korea.”

Ms. Lianne Muller, president of the GCS Curacao Chapter, said “Regretfully a pandemic has made it impossible for us to come together physically to show our support for the DMZ peace movement. But we are all still joined in spirit and through this virtual meeting we have come together with one common goal: world peace. We will continue striving to fulfill our social responsibility to mankind through taekwondo, thereby also honoring the GCS slogan ‘Peace is More Precious than Triumph.”

Mr. Elvin Landrau, president of the GCS Puerto Rico Chapter, said in his peace message that “As we stand in an era of uncertainty, one thing is certain: Taekwondo knows no boundaries because peace is more precious than triumph.”

Mr. Prakash Shumsher Rana, president of the GCS Nepal Chapter, said “WE GCS Nepal Chapter and GCS International has always been striving and spreading the message of peace and prosperity within the World Taekwondo family and out as well.” “With the very message of peace, Dr. Chungwon Choue, president of GCS International, inaugurated a peace statue on August 3, 2019 at Swoyambhunath Temple in Kathmandu, Nepal, the location which is one of the UNESCO World Heritage site. We very much welcome you all to pay a visit and take a memory of peace from the site as well.”

The 2020 DMZ Peace Festival closed with a group photo with attendees holding the GCS slogan (Peace is More Precious than Triumph) banner in front. 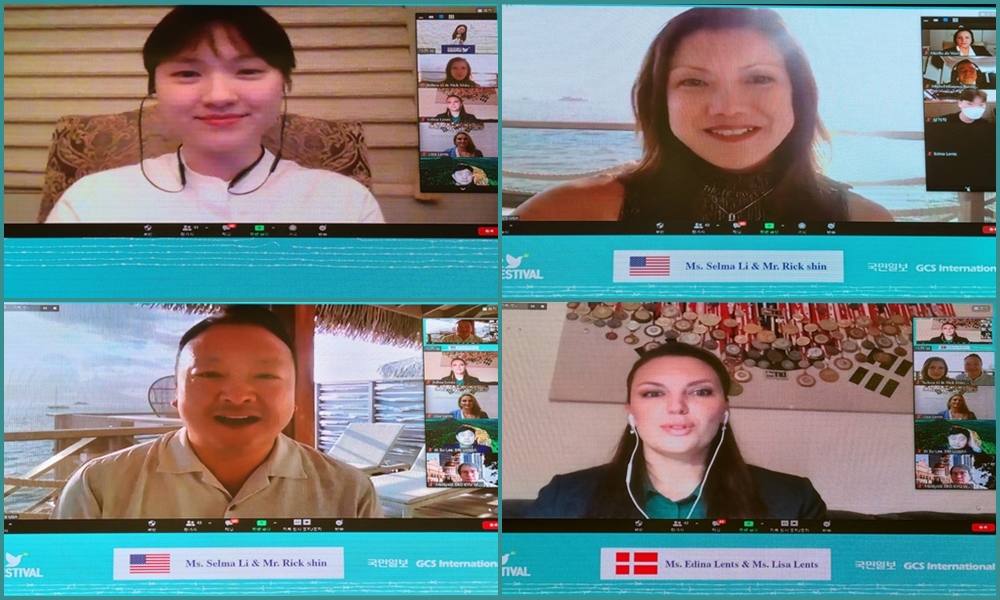 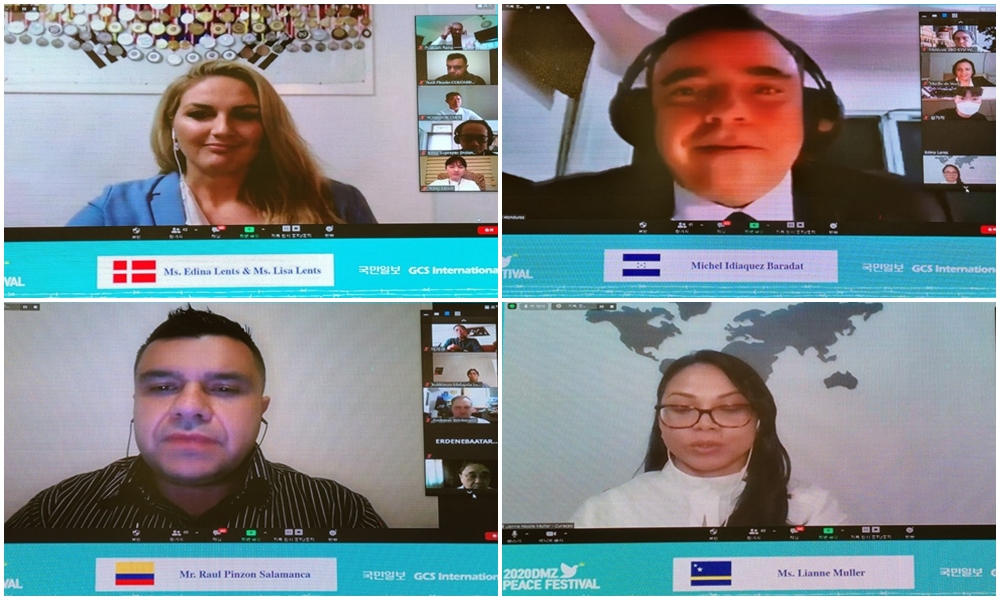 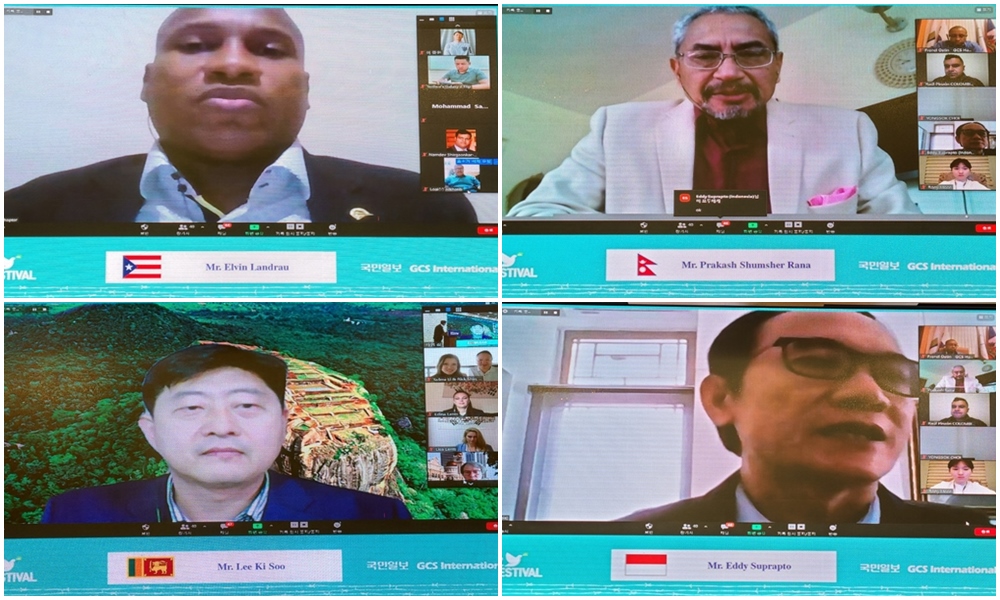 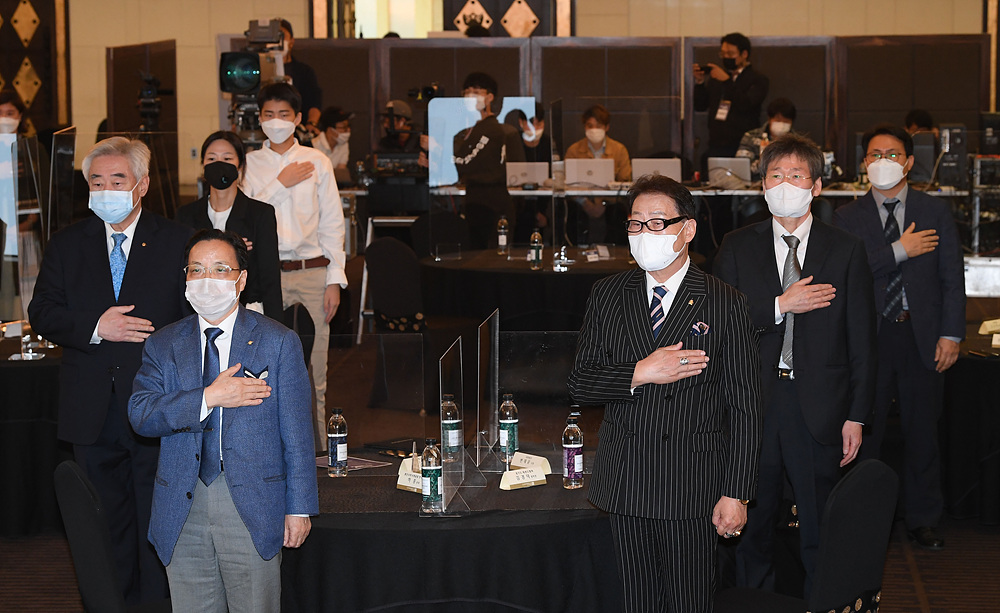 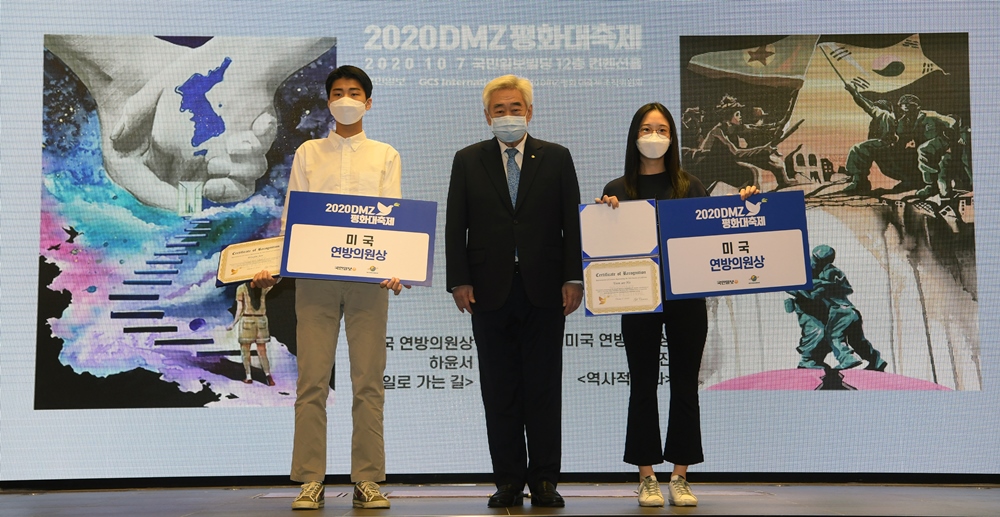 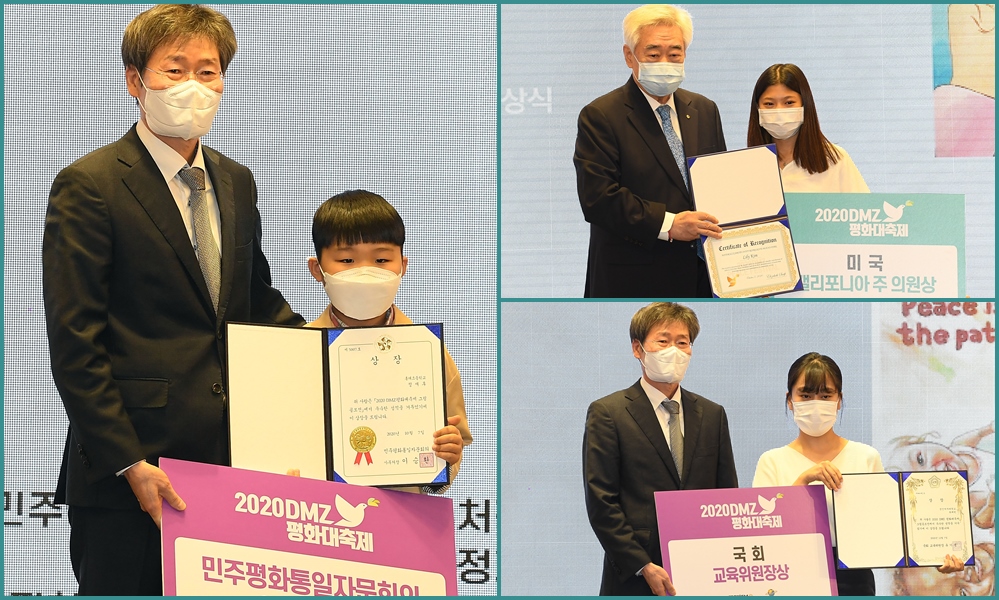 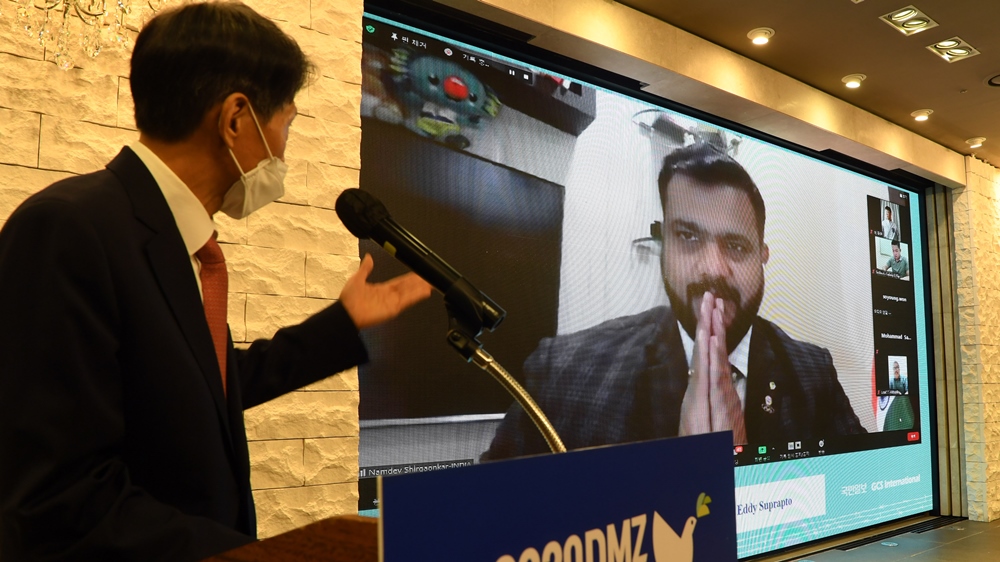 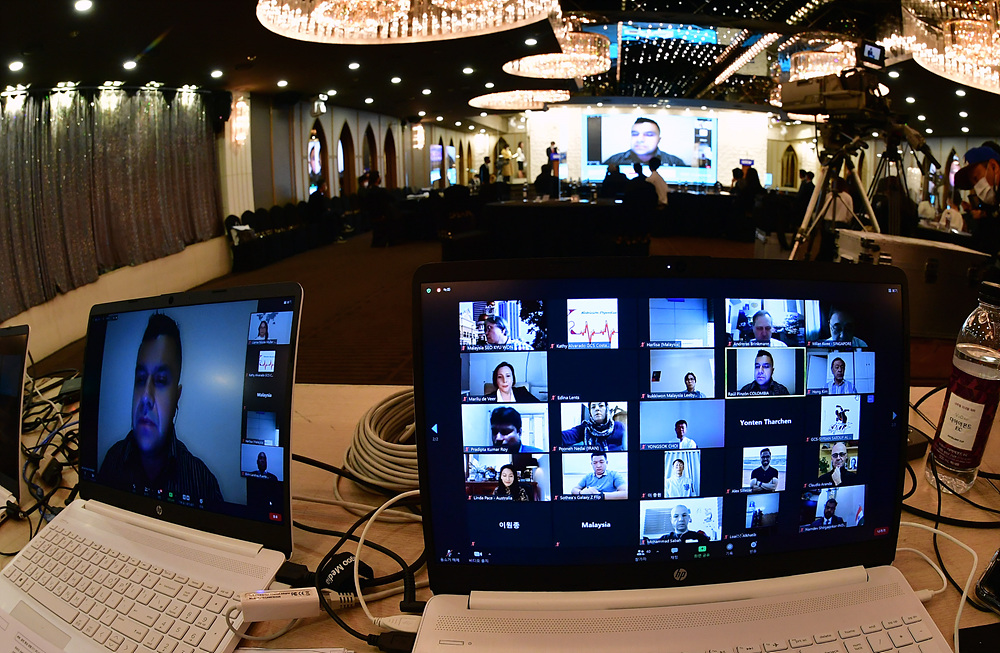 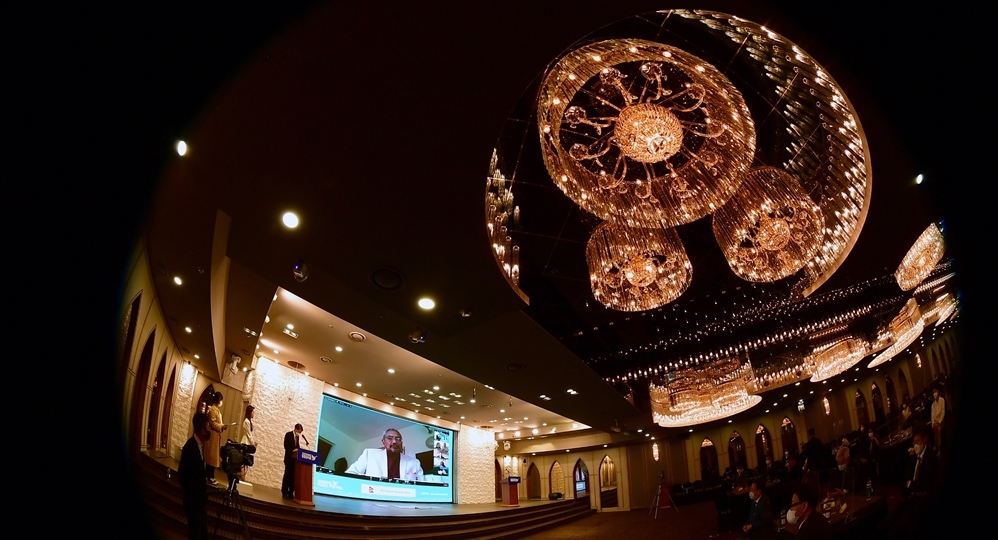 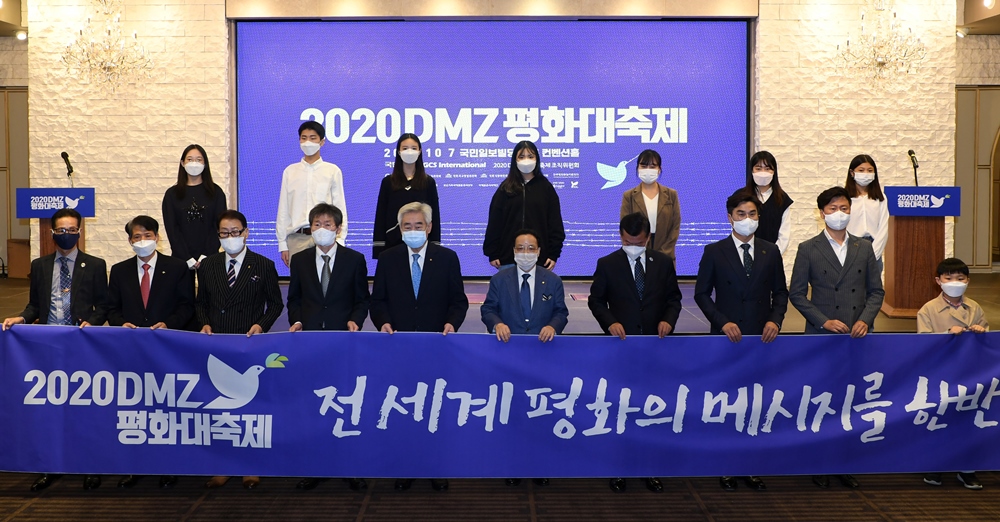 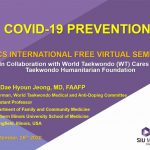 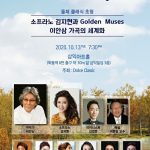